I love a big bowl of warming porridge in the morning. Traditionally porridge is made from oats but I often find that I am hungry again by mid morning so I have begun experimenting with different grain. After discovering and adapting a recipe from I Quit Sugar by Sarah Wilson, I have settled on using quinoa which is loaded with protein so keeps me fuller. I can also make it the night before if I know I have an early start, so I can just reheat it with some extra water before I rush out of the door.I love how the quinoa soaks up the coconut milk which gives it a lovely creamy texture. If you’re not a fan of coconut milk, then you can use organic milk, almond, or oat milk, I find rice milk a little watery in the winter but it’s a perfect summer choice!In this recipe I use Coconut Crunch which I prep ahead for the week’s food to make sure I’m not grabbing something on the run. It’s a non-sugar based Granola, but you can top this with all sorts of fruit. Here we go! 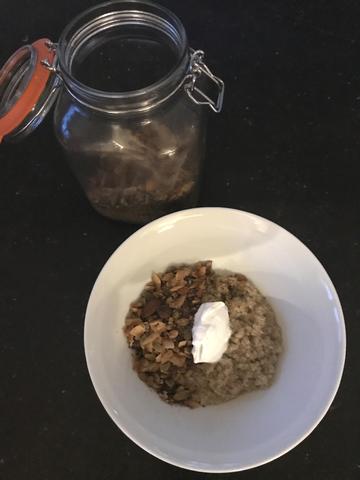 Rinse quinoa under cold running water in a colander and then place in a pot with the cinnamon, vanilla extract, coconut milk and 400ml water. Bring to the boil.

Reduce the heat, cover and cook for 15 minutes until soft.

Serve in a bowl with some Greek or coconut yoghurt and coconut crunchy granola.

Here's what I used to make the Coconut Crunch topping last weekend:

Melt the Coconut oil
Put all dry ingredients in a baking tray
Add vanilla extract to the oil and pour over dry ingredients stirring through, then place in the oven and cook for 15-20 minutes
Store in an airtight glass jar.